The Summer of Theme 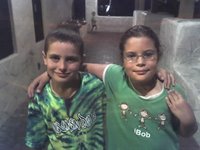 Yesterday was a whirlwind, one-day trip to Six Flags Fiesta Texas (warning, Flash ahead) in San Antonio. We had a total blast and rode lots of great rides! Unfortunately, there was some weird height restrictions that were undocumented on the website, so we didn’t do Scream, Superman or Poltergeist. The kids had a blast on Rattler, which was pretty scary from a “holy crap this thing is rickety” standpoint. And Boomerang was a ton of fun. The kids seemed to like Der Fleidermaus (sp?) — they rode it like 5 times. Nothing like spinning around in a big circle for 3 minutes! Wheee! The best part of the night had to be when we went on Power Surge. The ride itself was your basic four-across-log-ride-with-splash-at-the-end, but the fun was afterward…. The kids stood on the over-ride crosswalk (at our suggestion) to watch the next boat come down the ride. Hah! They got completely soaked. Griffin was not amused that she was tricked into that, but she definitely found it funny.

Of course the Summer of Theme started out back in April with our trip to the land of Disney. And while the family was in Wisconsin, they went to Wisconsin Dells and the Mount Olympus (warning, Flash ahead) theme park where the kids rode Hades all by themselves (that was actually an accident, we didn’t realize it was one of the scariest rides in the country until after they went). A couple weeks ago, they went to Volente Beach and we’ll probably go back there again before summer’s over, since we bought discount “revisit” wristbands.

All-in-all, I think we’re pretty tired, and ready for school to start back up. The fun’s not over yet, though! This Friday night Grandma and Grand-dad and cousins Nik and Drew are coming to town for the 6th Annual Aggie Night at the Dell Diamond, which I’ve just learned has sold out! On Friday, with fireworks! Should be a lot of fun.

This entry was posted in Uncategorized. Bookmark the permalink.